The IXth Non-Proliferation Treaty (NPT) Review Conference took place from the 27th of April to the 22nd of May 2015 in New York City, under the chairmanship of the algerian ambassador, Mrs Taous Feroukhi.

After intensive dialogues, the conference was not able to agree on a consensus document. The polarization of the talks, sometimes offsetting the strategic context, and the disagreement on the issue of the Middle East weapons of mass destruction-free zone impeded a consensual outcome.

France is still fully engaged in favor of the implementation of the NPT in its three pillars. During this conference, France recalled that the step by step approach to disarmament was the only one likely to produce concrete results. For this reason, the priority must be the entry into force of the Comprehensive nuclear-test ban treaty (CTBT) and the negotiation at the Conference on disarmament of a Fissile Material production for nuclear weapons Cut-off Treaty (FMCT). France insisted on the deterioration of the strategic context and the growing number of proliferation crises, which are of concerns to the international community. France recalled the necessity to take into account the security context and the centrality of the principle of undiminished security for all, Lastly, it recalled it is essential to promote the responsible development of nuclear energy for civil purposes.

To ensure transparency, France organized in 2015 two visits for the representatives of 45 member States of the Conference on disarmament. The first was on the aerial base of Luxeil, on April the 16th of 2015. The second visit was at the Albion plateau on June the 18th of 2015, which used to be the ground-to-ground missiles site, and was disbanded since 1996.

The third Preparatory Committee (PrepCom) of the Nuclear Non-Proliferation Treaty (NPT) was held in New York on 28 April-9 May 2014 and chaired by the Peruvian Ambassador, Enrique Roman-Morey.

During this PrepCom, France handed out its national report prepared in response to actions 5, 20 and 21 of the action plan adopted by the NPT Review Conference in 2010, as well as an updated version of the document detailing the steps taken by France to implement the IAEA action plan on nuclear safety.

Moreover, in a side event to the Preparatory Committee, France signed the protocol to the Treaty creating a nuclear weapon free zone in Central Asia, along with the four other nuclear-weapon States.

These were two major gestures that demonstrated the commitment of the nuclear-weapon States to push forward disarmament, in accordance with the article VI of the NPT.

The second Preparatory Committee of the Nuclear Non-Proliferation Treaty (NPT) was held in Geneva on 22 April-3 May 2013 and chaired by the Romanian Ambassador, Cornel Feruta.

In a context marked by a worrying aggravation of regional crises in both Iran and North Korea, the State parties recalled that the NPT today remains the cornerstone of the international non-proliferation regime and one of the foundations of the collective security. Consolidating this regime is one of France’s top priorities.

This Preparatory Committee allowed for in-depth, balanced discussions on all three pillars of the Treaty Only this balanced and realistic approach, calling upon States to carry out concrete, gradual actions, will set the conditions for a world without nuclear weapons, in accordance with the goals of the NPT.

Regarding the Middle East, the Preparatory Committee recalled the major expectations related to the implementation of the 1995 resolution and achieving the goal of a zone free of weapons of mass destruction in the region. That ambitious goal requires patience, perseverance and an inclusive approach.

Following the success of the 2010 NPT Review Conference, whichenabled for the first time the adoption by consensus of a concrete, balanced action plan on the three pillars of the Treaty (disarmament, nuclear non-proliferation and peaceful uses of nuclear energy), as well as on the issue of the Middle East, the new Review Cycle began in Vienna, with the first session of the Preparatory Committee on 30 April-11 May 2012, chaired by Ambassador Peter Woolcott of Australia. The constructive atmosphere in which the debates took place enabled quick adoption of the rules of procedure by consensus. The Preparatory Committee confirmed the central role of the NPT as one of the foundations of our collective security The Preparatory Committee witnessed substantial, balanced exchanges on the three pillars of the Treaty (disarmament, nuclear non-proliferation, promotion of civil uses of nuclear energy), including on essential issues that were insufficiently reflected in the 2010 final document, such as compliance with international non-proliferation obligations and withdrawal from the Treaty. It reaffirmed the necessity to implement a WMD free zone in the Middle East, in accordance with the 1995 resolution 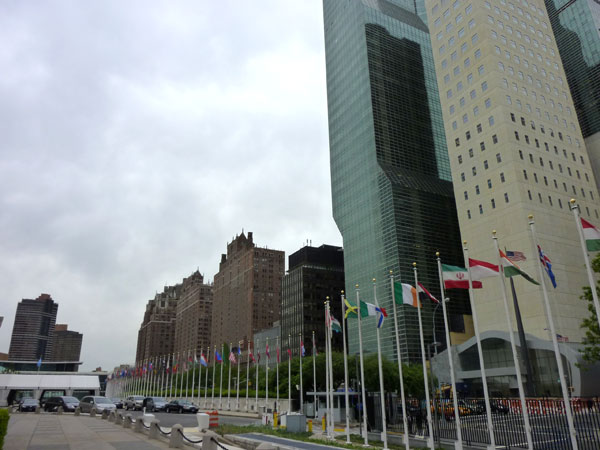 The 8th Non-Proliferation Treaty Review Conference took place in New York from the 3rd to the 28th May 2010, under the chairmanship of the Philippines Ambassador, Mr Libran N. Cabactulan. It came at a crucial time for the nuclear non-proliferation regime :

with considerable challenges : persistent proliferation crises in Iran and North Korea ; risk of nuclear or radiological weapons or material falling into the hands of terrorists ; risk of a inadequate response from the international community to such challenges that undermine the non-proliferation regime and seriously threaten both international and regional security.

but also many opportunities : opportunity for substantial progress in the area of disarmament, with prospects for a new agreement between the United States and Russia to reduce strategic offensive arsenals and new ratifications of the Comprehensive Nuclear Test-Ban Treaty (CTBT) 1, as well as the possible launch of negotiations for a new treaty banning the production of fissile material for nuclear weapons (Fissile Material Cut-Off Treaty). Hope that civil nuclear energy will help us meet the considerable energy needs in developing countries and make vital contributions to sustainable development and energy security.

For the first time, the States Parties to the Nuclear Non-Proliferation Treaty adopted by consensus an action plan with 64 concrete measures 2 on the Treaty’s three pillars (disarmament, nuclear non-proliferation and peaceful uses of nuclear energy). This positive result is likely to enhance our collective security and revitalize the NPT, which is the cornerstone of the nonproliferation regime.

For France, the NPT is above all a major instrument for collective security. It is in everyone’s interest to support it, preserve its integrity and strengthen it. Given the challenges the nuclear non-proliferation regime is faced with today, we need to work together towards a safer world so that we can accomplish all the Treaty’s objectives in order to reconcile security, stability and prosperity. This means implementing the three pillars of the Treaty : non-proliferation, disarmament and peaceful uses of nuclear energy.

Resolution 1887 3, unanimously adopted by the Security Council on 24 September 2009 at the level of Heads of State and Government, was a major step forward ahead of the Review Conference. It took stock of the major challenges that the nuclear non-proliferation regime is currently facing and provided an ambitious roadmap to address them. 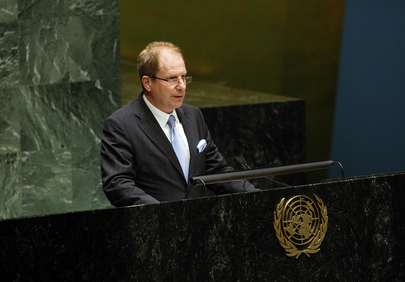 France committed fully to the success of the May 2010 Review Conference, which was an significant step forward in the international community’s efforts to strengthen the international nuclear non-proliferation regime and our collective security. The success of that Conference helped to consolidate the international community’s support for the NPT, in a context where the treaty is faced with a number of challenges. France welcomes that the 2010 Review Conference succeeded to adopt an action plan containing concrete, realistic proposals on all three pillars of the Treaty (disarmament, nuclear non-proliferation, peaceful uses of nuclear energy).

As regards disarmament, the proposals are consistent with our desire to achieve concrete, realistic actions, as are the three priorities of the Cherbourg action plan proposed by the French President in March 2008 and the EU strategy against proliferation : pursuit of the US-Russia disarmament process, entry into force of the CTBT, negotiation of the Fissile Material Cut-Off Treaty (FMCT). They also highlight the importance of confidence and transparency, which we advocated. France does, however, regret that the action plan was not more ambitious, notably regarding the moratorium on the production of fissile material for weapons (already applied by four nuclear-weapon States)

Regarding nuclear proliferation, France would have preferred a more robust language . It also regrets that the significant issue of NPT withdrawal was not tackled. However, a very positive point is that the non-proliferation text urges all States that have not yet done so to sign an additional protocol 4. It also highlights the need for compliance with non-proliferation obligations and calls for a response in the event of failure to comply with IAEA safeguards agreements and for cooperation with the Agency.

The final document also includes several actions to promote the responsible development of civil nuclear energy, building upon the dedicated conference organized by France in Paris, in March 2010.

The adoption of a specific text on the Middle East, providing for concrete steps including a project for a Conference on the implementation of the 1995 resolution, initially scheduled for 2012, was a positive step.

4 Model Protocol Additional to the Agreements between State(s) and the IAEA (PDF 99.2 ko)