Support for the responsible development of nuclear energy

France is fully committed to developing peaceful uses of nuclear energy, which is a source of energy that is sustainable and free of CO2 emissions. At a time when there are growing energy needs worldwide, and particularly in developing countries, France is convinced that nuclear energy can make a vital contribution to satisfying basic human needs and to sustainable development. However, implementing a nuclear power programme means taking ownership at the highest level of a full set of knowledge and skills and also involves having a strong culture of nuclear safety and security.

Nuclear energy : an area in which France has expertise

As part of a responsible energy policy, France has chosen nuclear energy for peaceful purposes as an essential component in its energy mix : 71 % of electricity generated in France comes from the 57 nuclear reactors in operation.

All French civilian facilities are subject to international controls.

France is fully committed to the implementation of Article IV of the NPT. At a time when there is a growing number of countries with nuclear power capabilities, France stands ready to meet these expectations, in line with its commitments made under Article IV of the NPT, and to share its recognized expertise with any country which diligently complies with all its international obligations, especially those under the NPT, and which pursues in good faith activities with peaceful purposes.

If we are to ensure everyone’s security, France considers that we must promote civil nuclear energy development that is responsible, in other words, that complies with the most demanding nuclear non-proliferation, safety and security requirements. France put forward strong proposals to that end at the preparatory committee for the NPT Review Conference in 2019 in a working paper 1 supported by 12 other States on framework for peaceful nuclear cooperation.

The atom has also played an important role outside of the energy field, as regards health (fight against cancer and diagnosis, fight against the spread of vector-borne diseases), agriculture, nutrition, access to water, protection of cultural and natural heritage... France believes that these applications must benefit all States, in particular developing States and supports the IAEA’s major role in the area.

Participation in the IAEA’s ICERR programme

In 2015, the CEA was the first research institution in the world to receive the ICERR label issued by the IAEA. The objective of the ICERR programme is to help IAEA Member States gain rapid access to existing research reactor infrastructure to carry out nuclear research and development and to strengthen their scientific capabilities. CEA has already signed several ICERR agreements with research organizations in Morocco, Tunisia and Slovenia (in September 2016), Indonesia (in March 2017), Algeria (in April 2017) and Jordan (in May 2017).

The CEA has thus consecrated its willingness to open up internationally by signing these ICERR affiliation agreements allowing IAEA Member States that are signatories and wish to acquire nuclear R&D skills to have access to operating research reactors with ICERR labels in other States, such as the Isis and Jules Horowitz reactors in France.

France is actively supporting the activities of the International Atomic Energy Agency (IAEA) linked to the development of peaceful uses of nuclear energy (nuclear power and non-energy applications) by sharing its experience and unique expertise and contributing to the financing of IAEA-led projects. This support takes various forms :

active support for IAEA initiatives in the field of developing infrastructures needed to introduce nuclear power to the countries wishing to gain access to nuclear energy via financial contributions and making available experts to the Nuclear Infrastructure Development Section (NIDS) of the IAEA ;

organization in France, in collaboration with the IAEA, of technical meetings or workshops on themes linked to the development of a nuclear power programme ;

participation from French experts and financing of security and/or repatriation operations of radioactive sources of French origin ;

financing major projects, including in the field of cancer research or the fight against malaria : France is bringing its expertise to the activities of the IAEA by welcoming and cofinancing with the IAEA the joint IAEA-IRD (French Research Institute for Development) research project on Reunion Island on the fight against malaria-bearing mosquitoes, dengue and chikungunya and supports the Programme of Action for Cancer Therapy (PACT) of which it is one of the largest donors ;

supports the use of nuclear techniques for the preservation of cultural and natural heritage, through several national structures (IPANEMA Laboratory / Synchrotron Soleil, AGLAE - Acélérateur Grand Louvre d’analyse élémentaires, or the ARC-Nucléart facilities) ;

welcoming and treating in its specialized services (Percy Hospital) victims of irradiation accidents using techniques which are unique in the world ;

setting up partnerships with major French actors such as the French Research Institute for Development (IRD) or the French National Cancer Institute (INCa).

Each year since 2011, alongside the IAEA General Conference France has organized a stand bringing together the institutional and industrial partners from the nuclear sector to set out its actions to support the IAEA. 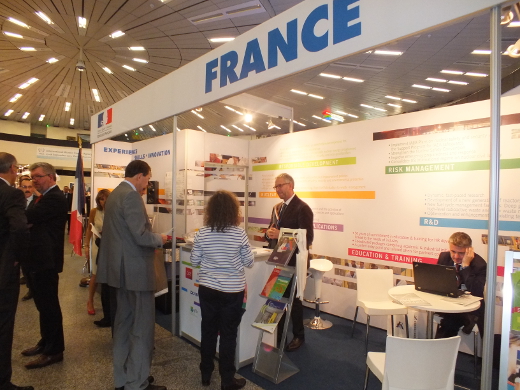 France is cooperating with a growing number of countries, particularly focusing on the needs expressed by developing countries. It has undertaken to begin long-term partnerships with several of these countries. France’s external nuclear policy is conducted under a rigorous, transparent and multilateral framework.

France, together with its European partners, pledged a European Union financial contribution of up to €25 million and technical support for the creation of a nuclear low-enriched uranium (LEU) bank under the auspices of the IAEA. Authorized by the IAEA Board of Governors in November 2010, the creation of this bank helps to encourage the development of economically-viable nuclear power programmes and to prevent the dissemination of sensitive technologies from the fuel cycle. France has also supported other initiatives in the field of multilateral nuclear fuel supply assurance, e.g. the British Nuclear Fuel Assurance (NFA) project or the LEU reserve in Angarsk proposed by Russia, both of which were adopted by the IAEA Board of Governors.

Website of the Permanent Mission in Vienna (in French)