At the United Nations Security Council

France’s action takes place first of all at the United Nations Security Council, given it is one of its five permanent member States.

At the UN Security Council, France undertakes its responsibilities in maintaining international peace and security. It also contributed, concerning weapons of mass destruction (WMD), to several initiatives, most notably :

The Security Council declaration of January the 31st of 1992, which affirmed the necessity for all the UN member States to fulfil their obligations related to disarmament, arms control, and to prevent weapons of mass destruction proliferation ;

Resolution 1540 of April 28th of 2004, which affirms that the proliferation, notably by non-state actors, of nuclear, chemical, biological weapons and their vectors constitutes a threat for international peace and security. Resolution 1977 (2011) renewed the 1540 Committee mandate for 10 years ;

Resolution 1887, adopted unanimously by the Security Council during the Summit on disarmament and non-proliferation on September the 24th of 2009, which reiterates the member States obligations concerning non-proliferation, disarmament, arms control. This resolution also set up a roadmap to respond to the proliferation challenges (support to the universalisation of the IAEA additional protocol, and support to the universalisation of the NPT) ;

Resolution 2231 adopted on October the 18th of 2015, which endorses the Joint Comprehensive Plan of Actions (JCPoA) on Iran’s nuclear program, signed by the five members of the Security Council, the EU and Germany on July the 14th of 2015. This agreement establishes a joint plan of actions aiming at limiting the Iranian nuclear program only to its civil energy purposes, and to reinforce international controls, in return of a lifting of the international sanctions ;

At the First Commission of the United Nations General Assembly 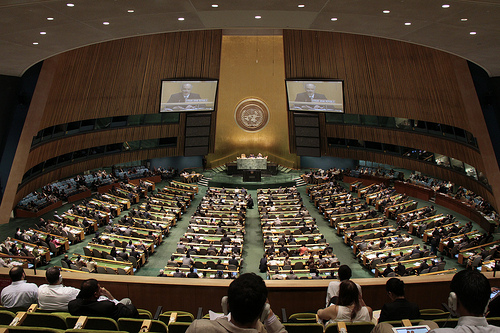 France actively participates to the work of the United Nations general Assembly’s First Commission (on international disarmament and security). France also works for the revitalisation of the United Nations Disarmament Commission (UNDC). France recently co-sponsored the resolution supporting the entry into force of the Comprehensive nuclear-Test-Ban Treaty (CTBT), which was adopted on October the 27th of 2017.

At the Conference on Disarmament

France is particularly committed to the Conference on Disarmamentestablished in Geneva, and its role as the “only forum of multilateral negotiation on disarmament” (Final document of the 1st special session on disarmament of the UNGA – SSOD, 1978). France participated in this forum to the negotiation of the Convention on Chemical Weapons (CWC) and of the Comprehensive nuclear-Test-Ban Treaty (CTBT). France is willing to negotiate a Fissile Material production for nuclear weapons Cut-off Treaty (FMCT) in this forum.

France takes part to other negotiations on disarmament in Geneva, separately from the activities of the Conference on Disarmament, notably the Biological weapon convention (BWC), the and of the Treaty on Certain conventional weapons (CCW). France is also committed to the works of the United Nations Institute for Disarmament Research (UNIDIR).

France promotes and participates to the initiatives taken under the treaties and agreements it joined.

For example, France has ratified treaties :

The Treaty on the non-proliferation of nuclear weapons (1968) 1

With the European Union

France is convinced that the EU plays a major role in international peace and security. France fully contributes to all the European initiatives to fight proliferation.

During its Presidency of the European union (2nd semester of 2008), France promoted the concrete implementation of the EU Strategy against WMD proliferation. New lines for actions against the proliferation of WMD were adopted in 2008 and renewed in 2010 and 2013 and still being implemented. In addition to this the EU put forward an ambitious plan of actions regarding disarmament, endorsed in December of 2008 by all the Governments of the EU.

France is also involved in the main international initiatives regarding nuclear security. As such, France is a partner of the Global Initiative to Combat Nuclear Terrorism, a member of the G7 World Partnership against WMD proliferation, and participated to the different summits on nuclear security between 2010 and 2016.

As well, France is a member of the different export control regimes, such as the MTCR, the Wasenaar arrangement, the NSG and the Australia Group.

3 Convention on the Prohibition of the Development, Production and Stockpiling of Bacteriological (Biological) and Toxin Weapons and on their Destruction (PDF 23.5 ko)

4 Convention on the Prohibition of the Development, Production, Stockpiling and Use of Chemical Weapons and on their Destruction (PDF 677.6 ko)

6 Convention on the prohibition of the use stockpiling production and transfer of anti-personnel mine (PDF 138.9 ko)