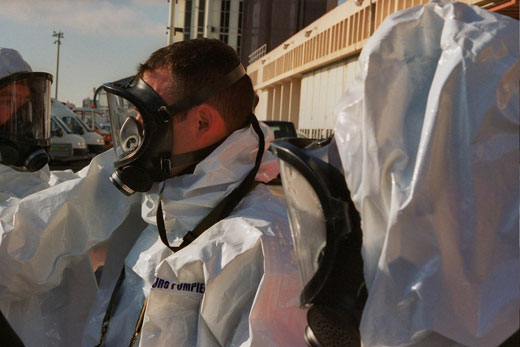 France takes risks of the emergence of nuclear or radiological terrorism very seriously, especially within a general context of a terrorist threat, illustrated by the Paris attacks of January 2015, and which appeals for strenghtening nuclear security worldwide, due to the cross-border nature of the terrorist threat.

Against this backdrop, the international community worked to adopt a number of international instruments and legal systems to prevent such acts.

Both financially and through contributions from its experts, France supports the work of the IAEA to provide protection against nuclear and radiological terrorism. In particular, it promotes the universalization and implementation of the Code of Conduct on the Safety and Security of Radioactive Sources. The European Union is the main contributor of IAEA funds for nuclear security, giving over €50 million between 2009 and 2019.

Furthermore, France encourages the definition and implementation of effective national standards to ensure security of storage and handling of sensitive materials to effectively prevent their diversion by malicious actors - terrorists in particular. In this regard, it considers that the Convention on the Physical Protection of Nuclear Material (CPPNM) 1 and its 2005 Amendment 2, adopted under the auspices of the IAEA, is an important international benchmark and an essential component in combating nuclear terrorism.

France also supports the IEAE advisory missions, and welcomed a two International Physical Protection Advisory Service (IPPAS), first in 2011 and then in 2018. During these IPPAS, the experts acknoweldged the "robust and mature" nature of the French nuclear security regime.

Every two years since 2005, the United Nations General Assembly has adopted a resolution submitted by France on "Preventing the acquisition by terrorists of radioactive materials and sources" 3. Each year since 2002, France has also co-sponsored a resolution introduced by India, entitled "Measures to prevent terrorists from acquiring weapons of mass destruction."

The particular threat that stems form nuclear terrorism is also addressed in the United Nations Global Counter-Terrorism Strategy. The Counter-Terrorism Implementation Task Force, which was created in 2005 and reports to the United Nations Secretary General, put in place a working group (of which the IAEA is a member) which is more specifically responsible for "Preventing and Responding to WMD Terrorist Attacks. "

France is a party to thirteen sectoral conventions in the field of counter-terrorism negotiated at the United Nations. Furthermore, on 11 September 2013, it ratified the 2005 Convention for the Suppression of Acts of Nuclear Terrorism (ICSANT), which defines new offences covering both the use of nuclear and radioactive materials and strengthens cooperation between States. France advocates the universalization of these conventions, which form a full and coherent counter-terrorism framework, and proposes assistance to this end to States which so request.

In April 2004, the United Nations took a crucial step forward with the adoption of Security Council Resolution 1540 4, which aims to prevent the risk of terrorists acquiring weapons of mass destruction and their means of delivery. This resolution is especially important in that it was placed under Chapter VII of the UN Charter, thus enabling the Council to ask States to take specific measures to meet their obligations.

France remains determined to implement the objectives of this resolution and to help other countries to meet their own obligations.

In the spirit of this resolution, France believes that sensitive export control reduces the risk of terrorists accessing materials, equipment and technology that could be used to develop weapons of mass destruction.

In 2011, the mandate of Committee 1540, which the Security Council has charged with monitoring the implementation of the resolution, was extended for 10 years by Resolution 1977, and saw its action strengthened by the creation of a group of international experts, responsible for supporting the efforts of the States experiencing difficulties in implementing the resolution. The principles of the Resolution 1540 have been reaffirmed in Resolution 2325 (2016).

France supports international initiatives which help to combat proliferation and reduce the risk of the hostile or terrorist use of nuclear and radioactive materials.

Since 2002, it has thus taken part in collective efforts made under the G7/G8 Global Partnership (GP) Against the Spread of Weapons and Materials of Mass Destruction and assumed its chairmanship in 2019 5. The aim is to help States which so request to secure the production and storage of sensitive goods, to improve the physical protection of their facilities, to strengthen controls on borders and exports and to securely manage nuclear or radioactive materials, to eliminate chemical weapons and control dangerous pathogens in their possession.

France has also been taking part in the Global Initiative to Combat Nuclear Terrorism (GICNT) since its creation in 2006. It has particularly focused on work to identify best practices in the area of detecting materials, preventing radiological or nuclear attacks and responding to a possible attack.

The Nuclear Security Summits have been held in 2010 (Washington D.C.), 2012 (Seoul) and 2014 (The Hague). This process has helped to mobilize States at the highest political level so that sufficient resources are allocated to strengthening national nuclear security regimes and international cooperation to take account of the identified risks.

The Nuclear Security Summit of 2016 in Washington recognized the central role of the IAEA in the international nuclear security architecture. During this summit, the French President presented a joint statement on radioactive sources’ security, co-sponsored by 32 States and Interpol. This statement was open to the IAEA’s States parties in december 2016 (INFCIRC/910).

France is also committed to ensuring the safety and security of the transport of nuclear materials. With regard to maritime transport, in 2012 France, together with Japan and the United Kingdom, initiated a constructive and informal dialogue with coastal States with the adoption of bi-annual and then annual roadmaps to increase transparency and cooperation with coastal States. Several activities have been organized as part of this informal dialogue : two tabletop exercises in 2015 and 2017, field visits, the drafting of a brief on emergency and preparedness, and educational videos. Furthermore, in 2018, France was at the origin of the creation of a secure website dedicated to the exchange of information between transport and coastal States. It took over the presidency of this informal dialogue in September 2019 for the period 2019 - 2020.

Since the end of the 1990s, France has initiated or contributed to programmes to secure radioactive sources in States lacking the resources to optimally manage their end-of-life. In particular, it helped States to locate and secure so-called "orphan" sources, or sources that were delicate to handle (Georgia, Ukraine, Russian Federation). Learning from these experiences, France, in cooperation with the IAEA, compiled an inventory of spent radioactive sources of French origin around the world. On this basis, sources of French origin were brought back to France in cases where States in which they were located lacked the adequate security conditions. At the IAEA, France has a support plan for the securisation of radioactive sources, in which France continues providing expertise and financing to repatriate or securitize radioactive sources.

Under the Plan, France has taken part in several IAEA expert missions and enabled Pakistan, for example, to acquire vehicles to confiscate and detect nuclear and radioactive material at borders. Furthermore, since 2010 and until 2016, it has made available to the IAEA, free of charge, an expert responsible for contributing to the Agency’s peer review missions (especially IPPAS).

France promotes the strenghtening of the radioactive sources’ security, particularly according with the lines defined in the INFCIRC/910 :

Strenghtening of the international legal framework ;

2 Amendment to the Convention on the Physical Protection of Nuclear Material (2005) (PDF 66.5 ko)