Export controls are one of the tools available to the international community in its efforts to prevent the proliferation of weapons of mass destruction and their means of delivery. It is becoming especially crucial to use common rules to manage exports of the most sensitive goods as an increasing number of States are acquiring industrial capabilities in the nuclear field.

The EU Strategy against Proliferation of Weapons of Mass Destruction thus emphasises the commitment of the Member States “to strong national and internationally-coordinated export controls”. On 28 April 2004, the adoption of Resolution 1540 (under Chapter VII) by the United Nations Security Council reinforced the role assigned to export controls in the international system to combat proliferation, alongside the major treaties.

The Zangger Committee was set up following the entry into force of the NPT in order to ensure implementation of Article III, paragraph 2 of the Treaty. In 1972, its members defined a number of common rules (“Understandings”) on the export of goods described in this Article.

The Nuclear Suppliers Group (NSG) came into being after the Indian nuclear test in 1974. The principal nations supplying nuclear systems and technology reached agreement at that time on a number of Guidelines for nuclear exports, which were published in 1978. These commitments formed the basis for the London Club, which subsequently became the NSG. The Guidelines are intended for purely national implementation and represent a political commitment on the part of each member which is not legally binding. Each Member State abides by control lists. The inclusion of a catch-all clause means that it can also control exports of unlisted goods, if it considers that they may be part of a proliferation programme. 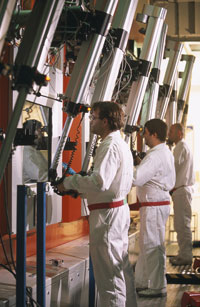 Nuclear and dual-use goods are submitted to NSG controls. Photo credit : Philippe Stroppa / CEAIn the wake of the discovery of Iraq’s secret nuclear programme in 1991, NSG members added rules on dual-use goods to the Guidelines. They also adopted a full-scope safeguards rule, which prevents suppliers from exporting to countries that have not placed all their facilities under IAEA safeguards. India was exempt from this rule in September 2008. By the end of 2002, consideration of how to prevent nuclear terrorism led to a further revision of the Guidelines. The prevention of nuclear terrorism now appears alongside the non-proliferation of weapons. At French instigation, the NSG also included in the Guidelines a provision on the protection of sensitive data on the design of nuclear facilities.

In general, NSG meetings address issues raised by the implementation of the Guidelines and the updating of lists of nuclear and dual-use goods. Members also exchange information relating to the Group’s goals. Notifications are also exchanged on refusals by Member States of applications made by companies. The NSG has 46 members.

France particularly encourages the NSG’s efforts to promote transparency of the regime. External contacts with non-member countries have been developed.

France also seeks to ensure that the achievement of the NSG’s non-proliferation goals does not impede the development of legitimate co-operation on the peaceful uses of nuclear energy.

France has committed to adopting strengthened criteria for the export of fuel cycle technologies (enrichment and reprocessing), which are more sensitive because they could have both civil and military uses. In early 2000s, France and Russia proposed a criteria-based approach to authorize exports of enrichment and reprocessing technologies and subject them to certain criteria such as compliance with international non-proliferation commitments. A proposal to amend paragraphs 6 and 7 of the NSG guidelines is under discussion. The adoption of the criteria-based approach would undeniably bolster the non-proliferation regime. It would ensure that the development of nuclear energy in the world does not lead to the dissemination of the most sensitive technologies of the cycle but benefits the countries with a real need, which are able to accommodate them and have sealed their long-term commitment to the non-proliferation regime.

As part of its action to control the proliferation of ballistic missiles  1 , France takes an active part in the Missile Technology Control Regime (MTCR), which it helped create in the G7, and for whom it ensures the Permanent Secretariat (point of contact) between partners. MTCR Member States have agreed on common criteria for the control of transfers of missile equipment and technology capable of being used as vehicles for weapons of mass destruction. France took part in the drafting and development of the MTCR’s technical annex, which came into force on 7 April 1987, and which establishes a list of goods whose transfer must be controlled by the States.

France has supported recent efforts to adapt the MTCR to address new threats, notably from terrorism. In addition, as a further measure to develop effective export controls, the member countries decided in 2003 to include a catch-all clause in the Regime Guidelines to enable exports of unlisted items to be controlled.

At European level, Council Regulation No. 428/2009 has included the recommendations of these different groups which are thus directly applicable in the domestic law of each of EU Member States. As a result of the catch-all clause, it will henceforth be possible to control exports of items not on a control list where they may be linked to the manufacture of weapons of mass destruction or are destined for a country subject to an embargo.

Controlling the proliferation of ballistic missiles

The proliferation of ballistic missiles, potential means of delivery of weapons of mass destruction, poses a destabilizing threat to peace and security, both regionally and internationally. Moreover, since the beginning of the 1990s, the ballistic missile range of certain non-nuclear-weapon States has grown at an alarming rate. Missile development programmes with the research of new capabilities (missile range and solid propulsion) have been conducted. We have also witnessed an increasing number of missile tests. In addition, new means of delivery have developed such as drones and cruise missiles, which may be used as means of delivery of weapons of mass destruction.

French policy aims to prevent such proliferation of the means of delivery of weapons of mass destruction.

From the outset, France supported the idea of a code of conduct to combat proliferation of such means of delivery. The Hague Code of Conduct against the Proliferation of Ballistic Missiles (HCOC) has become the primary multilateral instrument for combating the proliferation of ballistic missiles. As such, it fills an important gap in the international system. France played an active role in its elaboration. 93 States adopted the final text of the Code, made possible by the work done within the Missile Technology Control Regime (MTCR), and supported by a declaration, at French instigation, at the European Council in Gothenburg in 2001, in The Hague on 26 November 2002.

To date, the Code numbers 130 States-Signatories. It remains open for signature since as yet, not all States in possession of ballistic capabilities have joined it.

The HCOC lays down a general commitment to exercise restraint in the development, testing and deployment of ballistic missiles, including the reduction of national stockpiles and an undertaking not to contribute to proliferation. The Code also sets out a strong political commitment to put in place and comply with transparency measures in the form of an annual declaration on ballistic and space programmes, and prior notification of the launch of missiles and space launch vehicles. Finally, and no less importantly, it recognizes that States should not be prevented from making use of space for peaceful purposes, while affirming that space programmes must not be used to conceal ballistic missile programmes.

In this way, the HCOC seeks to tackle the “demand” for means of delivery, whereas the MTCR aims to control the “supply” of the technology. Having deliberately opted for a flexible and non-prescriptive approach, the Code has the advantage of laying down rules of conduct that are acceptable to all on an issue that until its elaboration had not been the focus of serious international reflection.

France spearheaded strong action to support the HCOC during the French Presidency of the European Union. It gives prior notification of the launch of missiles and space launch vehicles. With its European partners, it urges all States which are not doing so, notably the United States and Russia, to give prior notification of their launches of missiles pursuant to the HCOC.

France is also present in other international fora where the missile issue is addressed (in particular, the United Nations).

However, the international non-proliferation regime is not sufficiently armed to combat ballistic proliferation. To date, there is no binding multilateral treaty which aims to limit the possession and development of missiles or certain categories of missiles. That is why France, with its European partners, has proposed the negotiation of a treaty banning short- and intermediate-range ground-to-ground missiles.