Support and assistance to strengthening the nuclear non-proliferation regime

France is an active player in initiatives currently underway aimed at reinforcing the nuclear non-proliferation regime in practical ways in order to meet the challenges that threaten the future of the NPT. It is particularly committed to the creation of multilateral mechanisms in the area of the nuclear fuel cycle. It likewise provides assistance, where necessary, in disarmament and non-proliferation, and particularly through its support to Nuclear-Weapon-Free Zones.

Support to multilateral mechanisms for the nuclear fuel cycle

Fuel cycle technologies (enrichment and reprocessing) are particularly sensitive because they could have both military and civil uses. It is therefore necessary to be especially vigilant when it comes to their exports and at the same time introduce multilateral mechanisms in this field.

During its Presidency of the European Union, France, together with its European partners, pledged a European Union monetary contribution of €25 million and technical support in setting up a nuclear fuel bank under the auspices of the IAEA. This project is expected to further develop economically viable nuclear power programmes and prevent the dissemination of sensitive fuel cycle technologies. A nuclear fuel bank goes hand in hand with other initiatives which could be useful in different situations and meet various needs. France seeks to promote pragmatic and concrete solutions which respect the market and needs of beneficiary countries.

Moreover, under the NSG, France has committed to adopting strengthened criteria for the export of nuclear fuel cycle technologies. In early 2000s, France and Russia proposed a criteria-based approach to authorize exports of enrichment and reprocessing technology and subject them to certain criteria such as compliance with international non-proliferation commitments. A proposal to amend paragraphs 6 and 7 of the NSG guidelines is under discussion. The adoption of the criteria-based approach would undeniably bolster the non-proliferation regime. It would ensure that the development of nuclear energy in the world does not lead to the dissemination of the most sensitive technologies of the cycle but benefits the countries with a real need, which are able to accommodate them and have sealed their long-term commitment to the non-proliferation regime.

Nuclear-Weapon-Free Zones arise from international treaties concluded between the States of the relevant region. Such zones are made up of States that have renounced the option of possessing nuclear weapons or of authorising the stationing of such weapons on their territory. They also include, as the case may be, parts of the territory of States outside the Zone, in most cases nuclear-weapon States (NWS), who have likewise undertaken not to deploy nuclear weapons in the areas concerned.

France supports the establishment of Nuclear-Weapon-Free Zones. Of course it is necessary, in line with the principles set out by the Disarmament Commission in 1999 that they result from a unanimous decision by States in the region concerned with a geographical and military relevance and that they do not violate existing international universal standards, including the law of the sea. It is likewise important that they be discussed beforehand with nuclear-weapon States.

France is indeed convinced that a realistic and concrete approach needs to be taken to advance in security, disarmament and non-proliferation matters. This regional aspect of non-proliferation and of its contribution to everyone’s security continues to be affirmed in full accordance with Article VII of the NPT.

France, like the other nuclear-weapon States, has committed to refraining from deploying explosive nuclear devices in these treaties’ areas of application, from conducting nuclear tests there or from using or threatening to use nuclear weapons either against States Parties to such treaties or against those territories in the zone belonging to the States Parties to the relevant protocols. It therefore ratified on 15 June 2004, the agreement between France, the IAEA and Euratom extending the system of safeguards to all source material and all special fissionable material in all nuclear activities conducted in French territories located within the area of application of the Treaty of Tlatelolco, with the sole aim of verifying that such materials and products are not diverted to the production of nuclear weapons or other explosive nuclear devices.

Moreover France supports the establishment of a zone free from weapons of mass destruction and their means of delivery in the Middle East based on UNSC Resolution 687 (1991) and on the Resolution on the Middle East adopted by the 1995 NPT Review and Extension Conference.

The wish of NPT non-nuclear-weapon States to obtain legal measures providing them with assurances against the use or threat of use of nuclear weapons is understandable. It was expressed even before the signing of the Treaty, in the principles laid down by Resolution 2028 of the United Nations General Assembly, adopted on 19 November 1965. This made negotiation of the Treaty subject to the establishment of “an acceptable balance of mutual responsibilities and obligations of the nuclear and non-nuclear powers”.

Positive security assurances consolidate these negative assurances by obliging States to take steps (relating to collective security or assistance) in the event of any violation of such assurances.

France has made strong commitments in this area, both unilaterally and within a regional framework.

France’s deterrence doctrine is the first of such assurances because it is strictly defensive. The use of nuclear weapons would only be conceivable in extreme circumstances of self-defence. 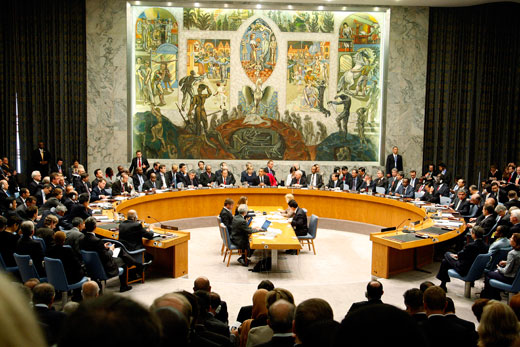 In Resolution 984, adopted unanimously on 11 April 1995, the United Nations Security Council took note “with appreciation of the statements made by each of the nuclear-weapon States (...) in which they give security assurances against the use of nuclear weapons to Non-nuclear-weapon States that are Parties to the Treaty on the Non-Proliferation of Nuclear Weapons”.

This Resolution provided for the first time a “comprehensive”, “collective” and “concrete” response to the concerns of non-nuclear-weapon States regarding security assurances. “Comprehensive”, in that it includes both positive and negative assurances ; “collective” in that the Resolution was co-sponsored by the five nuclear powers ; and “concrete” because the Resolution refers to the measures that the Security Council could take in the event of aggression, notably in the areas of dispute settlement, humanitarian assistance and the compensation of victims.

The same Resolution reaffirms the need for all NPT States Parties to comply fully with their obligations. As such, it recalls a fundamental rule.

Lastly, France considers that giving negative security assurances within a regional framework is an important non-proliferation and disarmament path, in full accordance with Article VII of the NPT, thanks to the creation of Nuclear-Weapon-Free Zones. Over a hundred countries have been given negative security assurances by France under protocols to treaties establishing Nuclear-Weapon-Free Zones. Moreover, through these protocols, France has renewed the commitments it has taken concerning all non-nuclear-weapon States Parties to the NPT.

For the countries in such zones, the assurances exchanged between each other based on their renunciation of nuclear weapons are supplemented by the undertakings of the nuclear-weapon States to respect the status of such zones and to refrain from using nuclear weapons against States within the zone.

In this way, the creation of Nuclear-Weapon-Free Zones, combined with negative security assurances, constitutes an essential regional aspect of non-proliferation and contributes to the security of all in accordance with Article VII of the NPT.

Pursuing this regional approach seems to be the most realistic path towards progress in the area of negative security assurances.