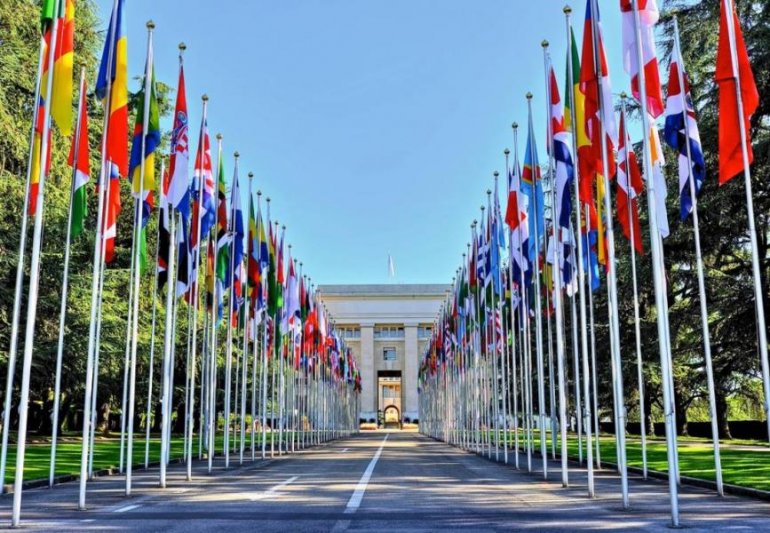 The NPT can only be strengthened with concrete and realistic measures as part of a balanced approach to the three pillars. Our road map is clear :

In order to preserve the international security architecture, the States Parties to the NPT should adopt a firm and united response to all the proliferation crises :

The top priority has to be the settlement of the North Korea crisis. That is why France, along with the United Kingdom and Germany, has taken the initiative of a joint statement, in the same spirit as last year, which has been signed by 62 States during the last Prep Com. Without prejudice to other processes or dialogue channels, this further statement is open to co-sponsorship by all States, which can thus reaffirm their commitment to the integrity of the NPT. We hope that by supporting this statement, the NPT’s States parties will reaffirm their support to the integrity of the non-proliferation regime.

Concerning the JCPOA, we call upon all parties to preserve this essential instrument and implement it as rigorously and transparently as possible, under strict IAEA supervision.

France attaches particular importance to continuous strengthening of the IAEA safeguards system. France calls on all the States that have not yet done so to conclude an Additional Protocol.

The negotiation of a Fissile Material Cut-off Treaty (FMCT) at the Conference on Disarmament under the Shannon mandate is an essential aspect. At a time when the spectre of a new arms race looms, the relevance of such an instrument remains total. France reaffirmed the FMCT priority by participating to the Governmental Group of Experts in 2014 and 2015, and by participating in 2017 and 2018 to the High level experts Preparatory Group in charge of elaborating an FMCT project. France is committed to spare no efforts in order to start the negotiations on a FMCT at the Conference on disarmament. France will pursue its efforts to start the negociation of a FMCT at the Conference on Disarmament.

Furthermore, discussions on the technical challenges involved in the verification of nuclear disarmament between nuclear-weapon States and non-nuclear-weapon States are also useful to help enhance mutual understanding and increase trust among States Parties to the NPT. That is why France participates actively in the technical work of the International Partnership for Nuclear Disarmament Verification (IPNDV). France also supported UN General Assembly Resolution 71/67 establishing a Group of Governmental Experts (GGE) on the role of verification in advancing nuclear disarmament, which will begin its work in a few days. We hope that as many States as possible will support these various, very promising processes

Meanwhile, the United States and Russia, which still possess almost 90% of the world’s nuclear weapons, need to continue their reduction efforts, even after 2021 when the New Start treaty expires. It is essential to preserve the existing instruments on arms control, which contribute to strategic stability.

With regard to expectations on the third pillar, we need to continue promoting responsible and sustainable development of civil nuclear energy, in optimal safety, security, and non-proliferation conditions and with respect for the environment.

It is with this in mind that we will be presenting, along with other partners, reflection on governing civil nuclear cooperation in order to share best practices. Nuclear safety and security are two essential components for the credibility of the development of peaceful uses of nuclear energy, and the IAEA plays a central role in international cooperation in these two areas.

At the end of the day, the objective for 2020 is clear : preserving and strengthening the authority of the NPT. In this respect, there is no possible path other than that demanding one of cooperation and consensus in order to stand equal to our collective responsibilities.

The first preparatory committee (Prep Com) of the NPT 10th Review conference took place from the 2nd to the 12th of may of 2017 in Vienna, under the chairmanship of the ambassador for the Netherlands, Henk Cor van der Kwast.

The talks of the first Prep Com were balanced and constructive.

The French delegation 1 recalled nuclear disarmament, in order to be effective, must be progressive, pragmatic, and coherent with the strategic context, accordingly with the principle of undiminished security for all. As such, the next logic steps of disarmament are the entry into force, as soon as possible, of the Comprehensive nuclear test-ban treaty (CTBT) and the negotiation at the Conference on disarmament of a Fissile Material production for nuclear weapons Cut-Off Treaty (FMCT). The French delegation noted that the ongoing negotiation of a treaty on the prohibition of nuclear weapons ignored the strategic context, was dividing the international community and risked to undermine the NPT. The deterioration of the strategic context imposed to delegations to preserve the strategic stability and pursue an active non-proliferation strategy. That is why France brought, with the Republic of Korea, a joint statement on the threat North Korea’s ballistic and nuclear program represents. This joint statement was endorsed by 62 delegations. France likewise welcomed, with its partners, the negotiation and the endorsement of the 2015 Joint Comprehensive Plan of Actions on Iran’s nuclear program, and called for its strict and rigorous implementation. 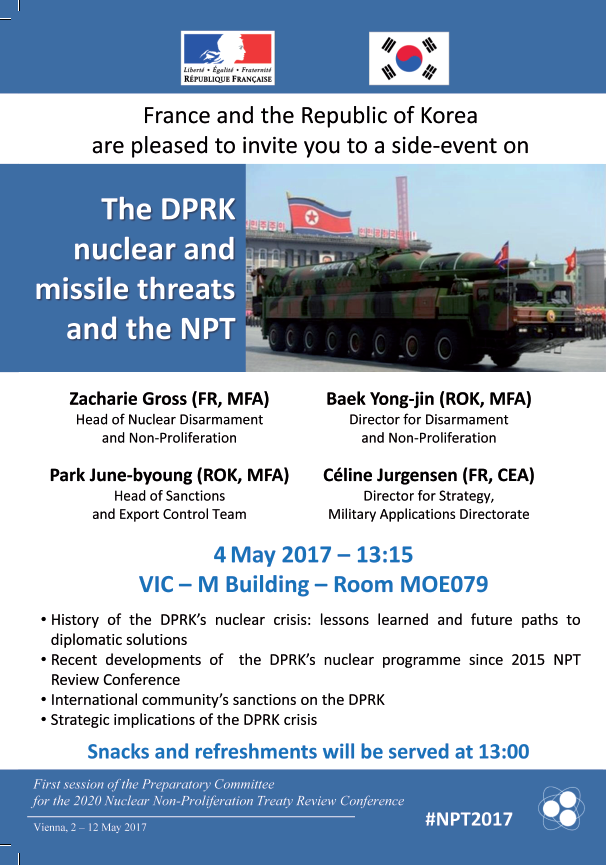 France supported the talks on the necessary universalization of the IAEA’s safeguards agreements and additional protocol. France also recalled the importance of nuclear safety and nuclear security, inseparable of the pacific uses of nuclear energy for civil purposes.

PrepCom 2 of the 10th Nuclear Non-Proliferation Treaty Review Conference was held in Geneva from 24 April to 4 May 2018.

On that occasion, the staff of the French Permanent Mission to the Conference on Disarmament, led by Ambassador Alice Guitton, received Ambassador Jean-Louis Falconi, Permanent Representative of France to the United Nations in Vienna, and the teams of the French Alternative Energies and Atomic Energy Commission (CEA) International Relations Directorate and the French Ministry for the Armed Forces Directorate-General of International Relations and Strategy. This joint participation helped highlight France’s commitments and achievements under the NPT, in accordance with the three pillars enshrined in the Treaty : nuclear disarmament, combating proliferation, and support for peaceful nuclear applications. As the Treaty celebrates its 50th anniversary in an uncertain international context, France, along with Germany, the Republic of Korea and the United Kingdom, has co-organized a side-event during the meeting on “the DPRK nuclear and missile threats and the NPT”.

The French delegation recalled that nuclear disarmament has to be gradual, pragmatic and consistent with the strategic context if it is to be effective, in accordance with the principle of undiminished security for all. As such, Alice Guitton took part in the panel of the side event organized by Canada on the implementation of the Fissile Material Cut-off Treaty (FMCT). Such a treaty would be a major step forward in disarmament. It would also correspond to France’s commitment in 1995, when it permanently stopped nuclear testing and ratified the Comprehensive Nuclear Test-Ban Treaty (CTBT). France put an end to its own production of weapons-grade fissile material and completely dismantled the related production facilities.

At the initiative of the European Union, Jean-Louis Falconi took part in the panel of the side event on international cooperation for the management of radioactive sources throughout their life cycle. France is particularly committed, in relation to the activities of the International Atomic Energy Agency (IAEA), to safe, secure management of radioactive sources, including spent sources.