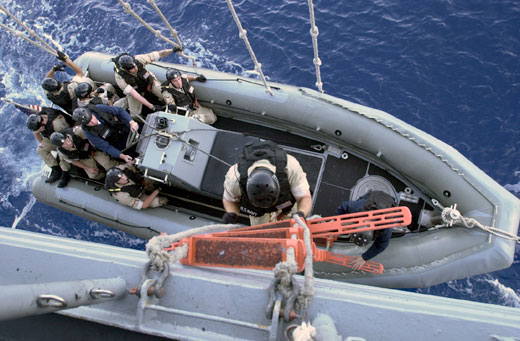 What is the aim of the Proliferation Security Initiative (PSI) ?

The Proliferation Security Initiative (PSI) launched in 2003 aims at enhancing international cooperation between volunteer countries, in order to impede transports of weapons of mass destructions, theirs delivery systems and related material, the proliferation of which is a threat for international peace and security, accordingto the UNSCR 1540 (2004). This may include nuclear, chemical and biological weapons, their delivery systems, and equipment and materials contributing to their production or use. PSI aims at facilitating the exchange of experience and the strengthening of skills through regular trainings. The States participate on a voluntary basis, and aim at building their capacities to intercept proliferating shipments.

The participation to PSI allows for concretely implementing one’s commitments under UNSCR 1540. The United Nations Security Council (UNSC) described the proliferation of weapons of mass destruction and their means of delivery as a threat to international peace and security (Resolution 1540 1 - 2004). In particular, it called “upon all States (…) in accordance with their national legal authorities and legislation and consistent with international law, to take cooperative action to prevent illicit trafficking in nuclear, chemical or biological weapons, their means of delivery, and related materials.”

How many countries participate in PSI ?

105 countries currently support the initiative on a voluntary basis and have adhered to its objectives, the “Paris Principles/Statement of Interdiction Principles”, which were adopted in Paris in 2003. Among them, 21 countries form the Operational Experts Group (OEG).

Since its creation, the Proliferation Security Initiative’s approach has been to open up to as many countries as possible : all countries wishing to cooperate to carry out concrete actions against proliferating flows are welcome to join. A State need only endorse the Paris Principles to join PSI. 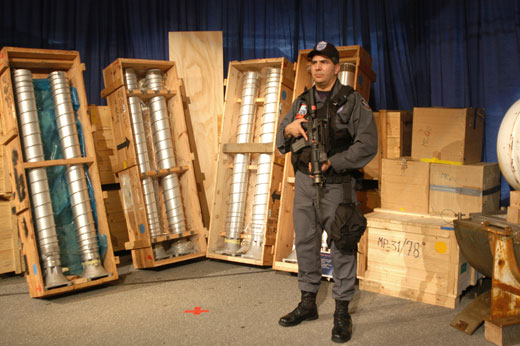 How is the PSI organized ?

The PSI is an international initiative characterized by its flexibility (lack of a permanent structure) and its pragmatism (meetings between experts and professionals). Three types of meetings are regularly organized.

PSI’s 21 main participating countries annually meet at the Operational Experts Group (OEG). Focused on matters related to effective interdiction of suspect cargo (via sea, air or land routes), the meetings of the OEG have also tackled other subjects, such as the development of air and sea legislation, the strengthening of port and airport organization, the criminalization of proliferation and outreach to countries on the risks related to proliferation.

What is France’s role in PSI ?

France has participated in PSI since its inception. It hosted the third plenary meeting of the Initiative on 3-4 September 2003, during which the participating States endorsed the Statement of Interdiction Principles (“Paris Principles”) which laid down the aims of the Initiative and the commitments of the States to achieve them.

France planned the organization of several multinational maritime interdiction exercises (Basilic 2003 in the Mediterranean and GUISTIR 2008 in the Gulf of Aden) as well as air exercises (ASPE 2004 and HADES 2006 in France). It regularly participates in exercises organized by partners (Leading Edge ; Eastern Endeavor).

During the 2013 HLPM in Warsaw, France and Germany jointly launched the PSI’s “Mediterranean Initiative” aiming to strengthen regional cooperation between voluntary Mediterranean countries to face proliferation in region. Since 2015, three events were organized by Germany, France and Italy. France will welcome the next HLPM in Paris on May of 2018.

How is the PSI placed regarding current international treaties and non-proliferation regimes ?

The PSI is a tool which enriches and complements existing instruments aimed at combating the proliferation of WMD. It does not seek to replace them, but rather to strengthen international coordination to ensure their effective implementation.

It thus supplements national and international efforts to combat proliferation of weapons of mass destruction, including the Treaty on the Non-Proliferation of Nuclear Weapons (NPT), the work of the Organisation for the Prohibition of Chemical Weapons (OPCW) and of the International Atomic Energy Agency (IAEA), and the various multilateral export control regimes (NSG, MTCR, Australia, Zangger and Wassenaar). It does not replace any of these non-proliferation mechanisms, but rather relies on them and provides an operational international cooperation scheme when certain States or non-State or terrorist groups attempt to circumvent them.

Does the PSI conflict with the international law of the sea ?

The interceptions within the PSI are carried out in strict compliance with international law and principles, notably the United Nations Convention on the Law of the Sea (UNCLOS). The boarding and search operations in high sea must result from reasonable grounds to suspect the ship of carrying weapons of mass destructions, their delivery systems or related material. These operations can only be carried out with the express authorization of the flag State.

If a general inspection within territorial waters or in the port facilities of a State is deemed necessary, such inspection must be carried out by law enforcement officers or agents empowered by the State. These authorities take all the appropriate measures, such as getting onboard, proceeding to search operations, seizing the shipment, in compliance with the State’s national legal provisions.

PSI has enabled endorsing States to harmonize their procedures and share information relating to concrete cases of proliferation in a field where international cooperation and interagency coordination are vital. The training for and the validation of these courses of action have been possible thanks to several real land, sea and air operations, some of which received media coverage. These exercises are essential tools to deepen common interception procedures. They improved interoperability between participating States in addition to information exchanges.

From an operational point of view, the PSI has allowed participants to conduct numerous conclusive operations, i.e. operations which have effectively interrupted trafficking of materials, goods or equipment dedicated to proliferating programs. Taking due consideration of discretion and effectiveness imperatives, these operations were not given any publicity. Several of them, however, were the subject of notification to the United Nations Security Council, when trafficking constituted a major violation of sanctions decided by the Council.